The grey era came with a great number of track options and accessories. Most were released in 1980, including this set 7860.

Of all the accessoiries LEGO provided for the grey era, this set is arguably the coolest. This signal kit allows a train to be stopped and started remotely, all while other trains keep running. The lights of the corresponding signal post are switched from red to green accordingly. 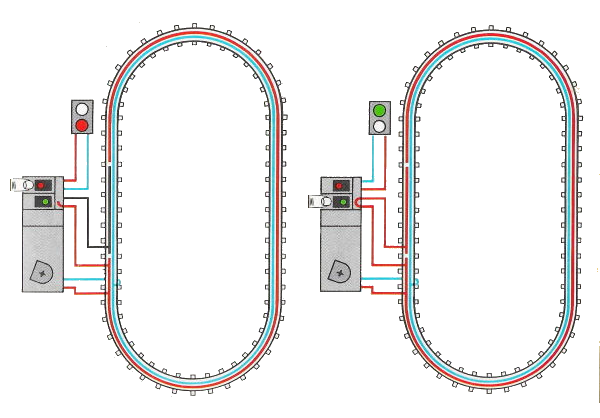 Once you press the green button of the controller, the controller reconnects power to the cut-off section, allowing your train to continue its journey. At the same time, the signal post will turn from red to green. Features like the signal are one of the main reasons for the grey era to be considered the greatest LEGO Trains period. In pre-digital times, dividing your track layout into individually powered sections was the only way to have multiple trains running.

Through the years, 3 variations of the interrupted conducting rail have shipped, either with or without the triangle pattern, and with the interuption either at the center or at the end of the conducting rail:

3 variations of the interrupted conducting rail