The grey era came with a great number of track options and accessories. All-but-one were released in 1980 and were available all the way to 1990, except for this 7862 which was available between 1981 and 1984.

Introduced in 1981, this set enhances your train layout by allowing you to decouple two vehicles remotely. A rotating disk with 2 hooks is placed at the center of the decoupler. When the decoupler is activated using the remote control (designed to be connected to 7864), 12V motor rotates the disk. 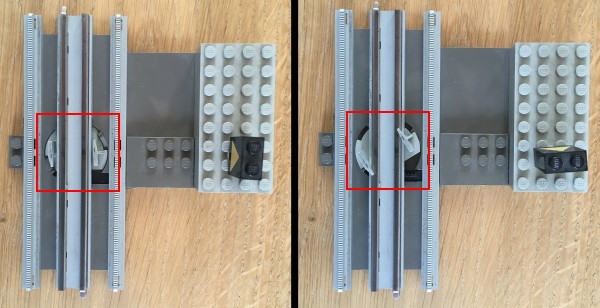 Because of the design of the hooks, rotating the disk forces the hooks to come up and move over the conducting rail at the center. This blocks any train from moving over the center of the decoupler, as the hooks collide with the wheel brick. So now if the locomotive starts moving away from the activated decoupler, the next wagon will hit the hooks and will be forced to stop. The impact of the collision causes the magnets to disconnect, thus decoupling the train.

This is the only set of the grey era which is a bit flawed. It works fine, as long as everything is adjusted perfectly. But when this is not the case, there will be problems and malfunctions. This might well be the reason this set was the only of the remote controlled sets to be discontinued halfway through the grey era.

In fact, this might very well also be the reason why this set was introduced in 1981 instead of 1980 like all the others. When the new grey track system was introduced in 1980, all tracks, switches, signal posts and auxilary sets where assigned a set number in the range from 7850 (straight tracks) up to 7865 (12v motor). The only number from this range that was not used was 7862, which was then assigned in 1981 to this decoupler set. My guess is that LEGO planned to release the decoupler in 1980 as well, even assigning it a set number, but just didn't get it to work in a satisfactory way and decided, perhaps last minute, to postpone the release of the decoupler. 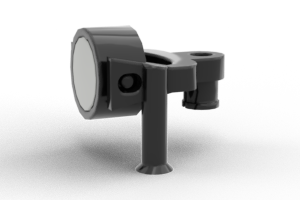 This might also solve another little mystery: why is the train coupling part 4023, which was used throughout the grey era, equipped with a pin? Could it be that the decoupler that didn't make the cut in 1980 somehow used these pins for decoupling?