The grey era came with a great number of track options and accessories. Most of them, like this 7864, were released in 1980 and were available all the way to 1990.

The transformer is more than just a power supply, it is the heart of your train layout. You can use the speed throttle knob element to adjust the power from zero to 12 volts, thus speeding up your 12V train. Instead of using the knob, you can also build a speed lever. Although this does not improve the handling per se, it does look pretty good.

The left side of the transformer is a connector dock for adding the remote controllers for signal posts (7860), switch points (7858, 7859 and 7863), decouplers (7862) and road crossings (7866). This may result in a huge control desk that looks streamlined and very impressive.

By using the throttle knob element upside down, the output of the transformer will be limited to 4.5 Volts, enabling it to run technic 4.5V motors.

Although the design of the transformer itself never changed, it did come with different plug types (UK or EU), depending on the country where it was sold. More interestingly, the contents of this set changed at the start of 1981. The difference is in the way the speed lever was constructed. 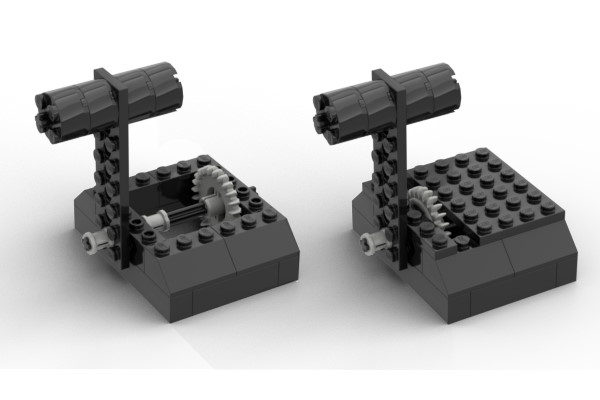 Before 1981, the top of the lever was open, allowing you to look inside the construction. After 1981, the set came with two additional (1x6 and 4x4) black plates to hide the inner workings of the speed lever and probably to strengthen the construction as well. The design of the box was also updated to reflect this change.

Back in the days, this set was really quite expensive, but you needed it to run your 12V train. Today, you get them rather cheap, so it is easy to buy more than one and to create various electric circuits in your train layout.

This set is the only set of the grey era to be shipped with 3 different boxes.